Menu
NullCave
Log in Register
What's new
You are using an out of date browser. It may not display this or other websites correctly.
You should upgrade or use an alternative browser. 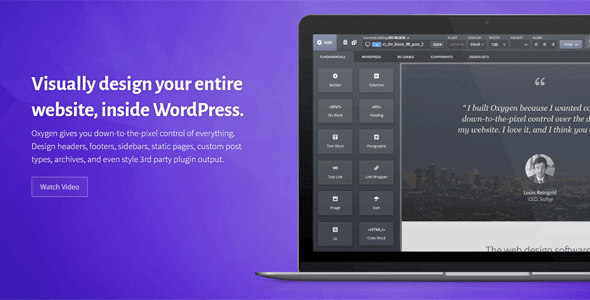 Oxygen Builder NULLED is a plugin for WordPress that allows you to visually design your site, from header to footer, without needing to write any code. If you want complete control over the look and feel of your WordPress site, Oxygen is what you've been looking for.

To view the content, you need to Sign In or Register.
There are a number of advantages to using Oxygen over the competitors. Primarily, users of Oxygen enjoy faster loading sites with cleaner markup, less bloat, and far more power in controlling the design and layout of their sites. Additionally, most competitors are "page builders", whereas Oxygen is a full-fledged site builder for designing your entire site, header to footer and everything in between.

Oxygen is built on a principle of only loading what's needed, when it's needed. Other page builders load hundreds (or thousands) of kilobytes on blank pages. Oxygen only loads about 90 kilobytes on a blank page. Oxygen also outputs very clean HTML code. Whereas other builders generate large numbers of nested divs for simple content, Oxygen generates no unnecessary divs. Plugin features:

Scroll Animations. Choose from 27 tasteful animation types from the Animate on Scroll library to bring your pages to life - without garbage like bounces, twangs, or other cheesy effects. Control animation timing, delays, when to trigger, and more.

Custom Fonts. Use any font from Google, or give your pages that 'designer' touch with Adobe Fonts. You can also upload your own custom font files with ECF.

Custom Icon Sets. Use IcoMoon or free LinearIcons included with Oxygen, or upload your own custom icon fonts in SVG format.

Classes & States. Save time by using classes to style multiple elements at the same time. Tweaks to the class immediately take effect everywhere it is used - no need to repeatedly copy and paste styles.
Reactions: drigis3, obye, Joobili and 27 others